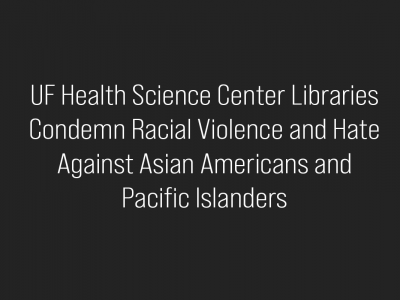 The UF Health Science Center Libraries condemn the racial violence and hate against Asian Americans and Pacific Islanders (AAPI) that have increased over the past year, represented most recently by the deadly shootings in Atlanta, specifically targeted at women working in spas and massage parlors. These horrific acts of violence hurt our entire community and we grieve with the victims and their families. Since the start of the pandemic we have seen an increase in violence, harassment, and xenophobia against Asian American communities. Unfortunately, acts like this are part of a historical record of anti Asian-American sentiment in the United States. We stand in solidarity with the AAPI community and support individuals, agencies, and organizations that work to dismantle systemic racism, misogyny, and oppression in all its intersectional manifestations. We will continue to fight for a world where diversity is celebrated and everyone is included.